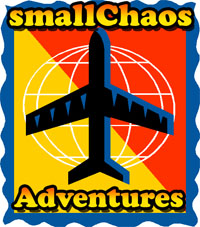 A Walk Through Lima

Exploring a region on foot provides a look at more than just the highlights. It gives a feel for the terrain, the size of a city, the remoteness of an area. You do not jump from point A to point B, but experience everything in between, both good and bad.

Walking through the vast city of Lima, Perú, allows you to take in the broad spectrum of their society. It quickly became apparent walking is not the norm, or recommended. After fighting off the illegal cabbies, we started making our way to the city from the airport. For every half block we progressed, a cab would pull over and honk. My introduction to the city is first made by having to leave the sidewalk to avoid being urinated on by a middle aged man in the midst of his daily routine.

From there, more homely sights followed. Enticing smells emanate from local pollerias, offering some amazing home grown chicken. One open store front reveals a peak at children gathered around, trying their feet at a Dance Dance Revolution. A few blocks down, kids are kicking a soccer ball back and forth across the dusty street.

Walking down one street revealed a most unusual sight. I would love to know the story behind it. Security seems to be a consistent concern in the city. The current street is residential. Most homes are surrounded by high solid walls and gated entries. The unusual home we came across consisted of a piece of land about 20 feet by 20 feet on a corner, surrounded solid walls on two sides and a high metal fence on the two sides facing the streets. This fence had no gate. it just closed off grass covered land with a lone tree in the middle. The mystery of its owner was soon solved as a cat scooted easily between the metals bars of the fence to the tiny home under the tree. A strange sight to behold.

Reaching downtown, darkness started setting in. Downtown means more people in the streets. Our guide book cautioned of the perils of downtown Lima. These warnings are reinforced as friendly locals we encounter repeatedly remind us of the dangers. Continuing on our path we see the warnings are justified. A dimly alley concealed a group of men beating up another. The next public square we enter is protected by numerous well-armed guards along with a large armored and weaponized vehicle.

Finally heeding the warnings, we leave downtown behind. The diamond in the rough of Lima is the Miraflores neighborhood. Walking it's streets, safety is a remote concern. The streets are clean. Upscale shops and restaurants line the streets, along with impressive skyscrapers. We even came across a gold and jewelry trade show held in an impressive grand ballroom. The experience is in stark contrast to our introduction to the city.

You could just take a cab from the airport to a fancy hotel in the Miraflores area, or take a bus to a downtown hostal. But, doing so only limits your insight into the city. Walking the streets provides the opportunity to experience the whole city, from its mundane backstreets, through the dangerous underbelly, and on to the ritzy tourist district. The city lies before your feet.